Out with the old, and in with the new!

New Year's Eve was spent with a box of Kleenex, Benadryl, Tylenol Cold and binge-watching episodes of Joe Kenda, Homicide Hunter on Investigation Discovery while dinner cooked in the crockpot. 🎉

I've had back-to-back colds since early December. Ugh! I haven't ventured out of the house since December 24! We did get out for a nice walk on the dikes on New Year's Day. 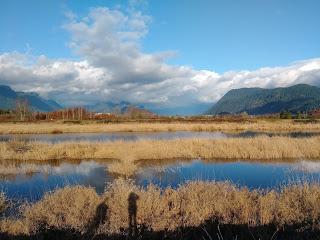 On the plus side, by the time I am ready to step back into the land of the living, Christmas clearance sales will be over and all the Valentine decorations and chocolates will be out on display! 😂😂

I have two new pillows to share, made from an old and very old UFO, neither of which were mine!
I picked up this Disappearing 9-patch Block from one of guild's de-stash nights probably a year or two ago and it's been waiting to be turned into something fun. I love the fabrics, especially the big cherries! I tried spiral quilting and this was the perfect project to convince me I won't likely spiral quilt a large quilt, ha! I love the look, but sewing in a circle is pretty tedious. Never say never, though!

I wanted something easy and quick to play with on NYE, so I decided to turn this into a simple pillow and I used this tutorial for the envelope pillow instructions: https://www.heytherehome.com/how-to-make-an-envelope-pillow-cover/ 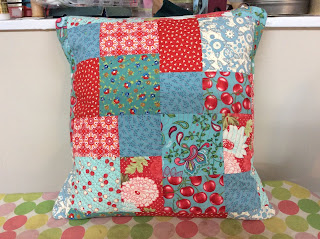 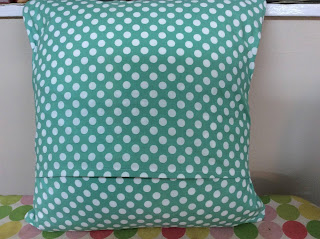 Once that was done, I pulled out this Dresden Plate block I found years ago in a box of fabrics a coworker had gifted me. I loved the vintage fabrics and hand blanket stitching on it but never did anything with it because it is stained. I sandwiched and finished quilting it shortly after Ryan Seacrest rang in the new year on TV and then called it a night. Such a party animal! 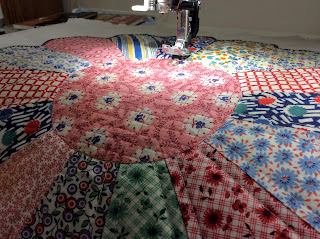 On New Year's Day after our walk (okay, after my nap, ha!), I pulled out some Darlene Zimmerman 30s reproduction fabric I've had in my stash forever, and added a border to the front and made an envelope backing. I then sewed around the border front to make the pillow flange. I treated the stain and washed it to see if it would come out, but unfortunately it wouldn't budge. It's not that noticeable, so I'm not going to worry about it! It came out nice and crinkly! I'll have to get another pillow form for it. 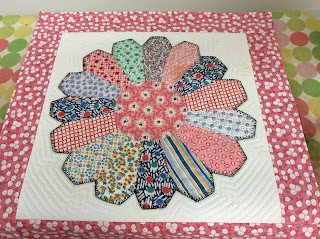 It feels like an accomplishment to turn these two long-standing UFOs into something useful and pretty and move them out of my sewing room! Yay!

Oh, I almost forgot! "Gramma Next Door" to rescue and puppy is all fixed! 🥰 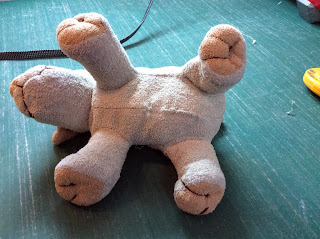 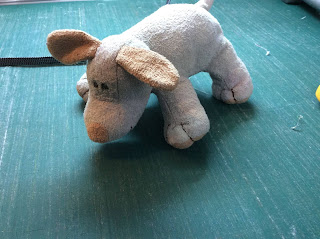 Linking up with:
Happy stitching!

Kat
British Columbia, Canada
My name is Kat. I like to quilt, sew and create, fitting it in where and when I can! I have an amazingly supportive hubby and family and am surrounded and inspired by awesome quilting talent in my guilds and in the blogosphere! 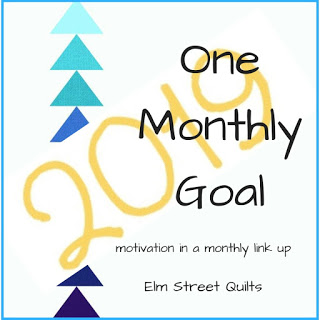 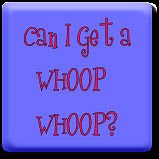 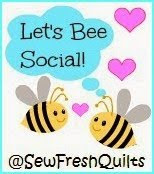